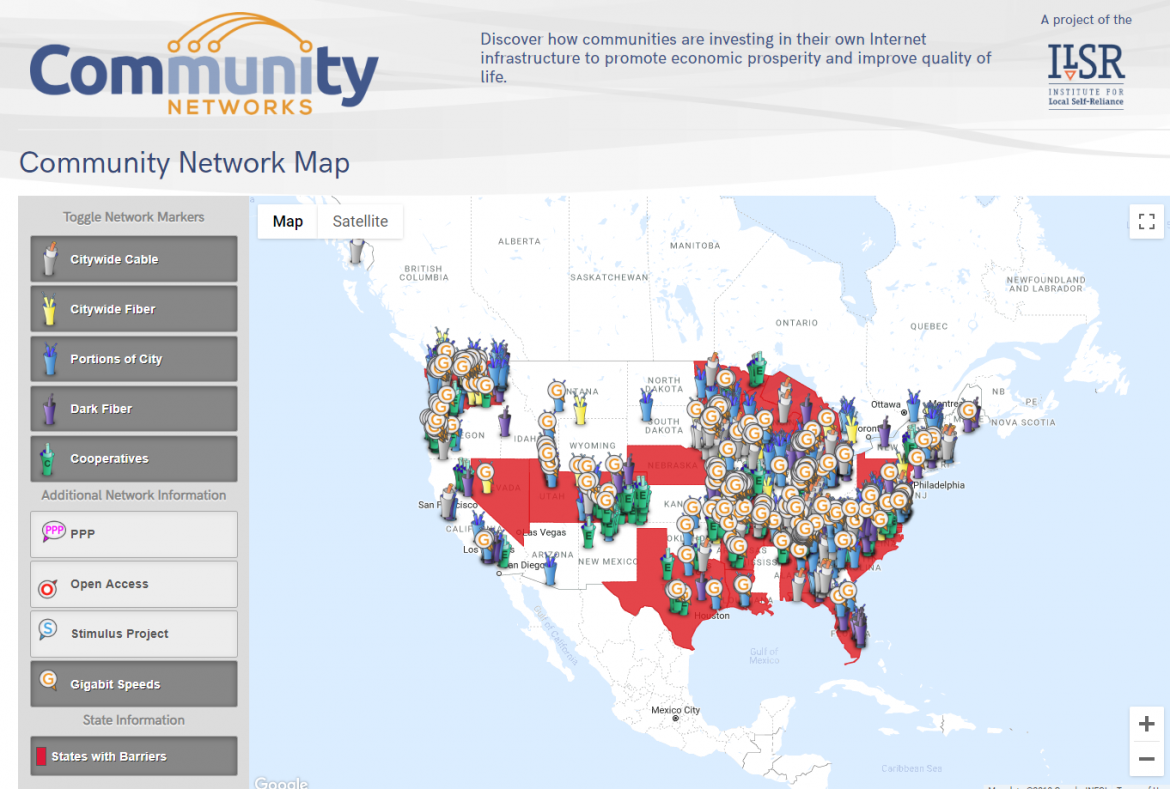 The internet was created to be—and has become—our public  commons. It is the central medium for communication and business, for public discussion and engagement, and democratic discourse and debate. Given its importance to the public, community networks should have been financed, constructed and managed as public infrastructure like municipal water systems, sewers, streets or libraries. High-speed optical fiber-based internet access networks should have been installed in every community with direct hard-wired connections to every household and workplace. Just as with electricity in the early days, internet access should now be for all, and in a form that is fast, affordable, neutral, sustainable and safe.

Yet, in the United States, internet access has been hijacked and walled off by relatively few corporations with commercial motivation to limit availability, quality and content of high-speed access to the public. The corporate takeover of the internet has been aided and abetted by our federal, state and local governments. Our politicians have failed us, so local citizen grass-roots action is moving to take back that power. In Bellingham, Informed and active citizens have tried to work with state, city and county elected officials and their administrations to advocate for creation of high-quality affordable fiber optic internet service for all. Forward-thinking cities and towns across the country have already successfully delivered proof-of-concept and now have fast, affordable and safe internet access for all of their citizens.

The Port of Bellingham is moving in the right direction, recognizing that poor telecommunications infrastructure is affecting overall growth in our county. The Port has received significant grant funds to begin installation of fiber optic cable to extend high-speed—and hopefully competitive and affordable—broadband to rural areas of the county.

Chattanooga, Tennessee, is just one of the first of more than 750 American communities that have built their own broadband networks to encourage open competition with big telecom and offer better, cheaper service to their communities. These networks are spreading across the nation as tech-savvy local governments support consumers and reject sub-par broadband speeds, high prices, and poor customer service.

A 2018 Harvard study confirmed that community-owned and open-access internet service providers (where multiple providers can compete) are cheaper and better. See Community-Owned Fiber Networks: Value Leaders in America (January 2018). That’s why Comcast and other big telecom corporations are terrified of community-run and open-access broadband: They stand to lose billions of dollars. The telecom corporations count on government-supported lack of competition in U.S. broadband markets, which leads to higher prices, slower speeds, and some of the worst customer service ratings in any U.S. industry. That’s just un-American.

Bellingham should pull the red carpet it has rolled out to big telecom and change course, like the rapidly growing list of cities that have successfully created community-owned and open-access fiber networks with better service and lower prices. Those cities have the edge to attract new business and quality jobs. So far, our local city government has been slow to wake up to this growing movement, but it’s not too late for common sense to prevail. And you don’t have to be a tech genius to recognize a good idea.

Basically, municipal and community-owned internet service providers offer similar services as Comcast and others, but they view provision of high-speed internet access as a means to achieve community benefits, including economic development and job creation. Chattanooga pioneered municipal broadband in 2010, and stressed comprehensive access to high speed internet to bridge the digital divide. The city’s fiber goes to each and every home, and the city’s fiber network is cited as the reason for its recent economic revival. Since its inception, Chattanooga’s city-run network has led to economic gains and is profitable—estimated to have generated at least $1 billion in economic growth and development since 2014. Since 2010, the city’s unemployment rate has dropped to 3 percent from 9.8 percent and the wage rate has been climbing. Volkswagen has boosted the manufacturing sector and Chattanooga is a model city for broadband innovation and explosive growth in its technology sector.

No surprise, Comcast initially sued Chattanooga to stop construction of its community network, but Comcast lost and is now competing directly with Chattanooga to offer cheaper service. Municipal and community-owned internet service providers – like Chattanooga – lease to private and public corporations, non-profit corporations, cooperatives and others—all to increase competition and add value to the consumer. Competition produces better, cheaper products and service—that’s the American way—or it used to be.

Meanwhile, Bellingham has installed the beginning of an admittedly poorly-mapped fiber optic network, leased only to big telecoms. The city, so far, has been unable to produce a comprehensive map of existing fiber optic installations, or to confirm whether they’ve been installed properly. Moreover, some previously installed fiber optic cable has been destroyed by subsequent public works projects, because the city not only failed to map the fiber, but failed to bury it properly.

The city has also resisted looking to Mount Vernon for an example of a well-designed and executed community-based fiber network. It defies both logic and common sense that the city has ignored repeated community requests to study and learn from Mount Vernon’s installation of fiber optic cable to “the last mile,” or to all residential homes and businesses—like Chattanooga and hundreds of other communities.

Instead, Bellingham has cleared the path for Verizon’s roll out of new 5G wireless infrastructure—whether we need it or not. Verizon and other telecom giants have spent decades writing and funding federal, state and local laws that not only seek to prohibit community broadband, but also to stop any local and open public process over wireless infrastructure. The telecom giants—aided and abetted by the FCC and some state and local governments (including Bellingham)—are free to roll out and install – with no public process – millions of new small-scale 5G cell facilities and antenna that require line-of-sight connection and provide substandard wireless service. The wavelength used by 5G is so easily disrupted that even rain can affect service. To work, the 5G cell facilities must blanket service areas by the millions and be installed every 100 feet or so to diminish disruption.

Of concern is the fact that there has been no pre-market safety testing of the effects of blanketing the nation with millions of small-cell 5G facilities emitting electro-magnetic radiation at close range, and which, ironically, will still need fiber optic networks to operate.

The Limits of Wireless Technology

The market has spoken, and consumers prize convenience. This, and enormous profit, has driven the demand for wireless technology. Federal, state and local regulations that fuel the telecom juggernaut has put wired fiber optic technology at a disadvantage and diminished access to public fiber optic networks. Meanwhile, wireless providers and their many friends in business and government have misled the public about the adequacy and safety of wireless systems which are—in fact—inherently flawed and work far less effectively than fiber optic cable. No surprise, installation of fiber optic cable to each business and residence is more expensive than installation of wireless infrastructure, and would reduce the outsize profits generated by wireless technology for a few giant telecom companies.

The terms landline, wireline and wired refer generally to both landlines mounted on poles and those—like fiber optic cable—buried in underground conduits. Users of mobile devices have little understanding of the vast and complex wired infrastructure that carries their information, mostly by optical fiber. Only the last few miles, or sometimes just a few yards, is actually wireless—which simply means radiating across free space.

Wireless includes WiFi, smartphones and tablets, 4GLTE cellular networks and the so-called 5G (fifth generation) along with the Internet of Things (IoT) by which electronics (including household appliances, surveillance cameras and cars, among many other devices) will be wirelessly interconnected. The end result of 5G and the so-called Internet of Things will be waves of radiation that will blanket all free space in our environment to allow these wireless connections to work. Yet, cable is—and will always be—a necessary component of wireless technology which is—and will always be—merely an adjunct to cable. Wireless technology, including mobile phones and tablets, have value, but are not substitutes for wired access networks. Wireless communication can never approach the speed and reliability of wired networks.

Wireless “smart” meters, phones, tablets and computers are useful and profitable. However, problems with excessive wireless use and layering of radiation are emerging, and include risks to public safety, security and privacy, energy waste and emerging effects on public health. The World Health Organization has listed wireless radiation as a “possible carcinogen,” a concern that has been validated by a U.S. Government National Toxicology Program Study.

Additional studies confirm other public health risks of radio frequency and electromagnetic radiation, including cellular DNA damage, lowered fertility, neurological and neuropsychiatric effects, impacts on childhood development and learning, and on addiction, mental health and social issues. And yet, our governments continue to allow roll-out of more wireless technology and devices to add more radiation in our homes and everywhere we go—whether or not we need or want it..

Instead of allowing the federal government, the FCC and local governments to enable the telecom industry’s installation of millions of new cellular antenna and 5G facilities nationwide, it may be wise to re-examine and stop our rush to make everything in the world wireless and connected. Is it possible that in this so-called “race” to 5G that we risk another tobacco or lead or asbestos-like health disaster with ever increasing amounts of electromagnetic radiation in our homes, schools, businesses, medical facilities and everywhere we find our most vulnerable people?

The least we should demand before wholesale roll out of 5G is further study of the health effects of increased radio frequency and electromagnetic radiation on people and the environment. Especially, with a safe, effective and affordable alternative: community owned and operated fiber optic networks.